React Native vs Ionic vs Xamarin vs NativeScript: Comparing All Frameworks

Over the years, several platforms and frameworks have been made to aid mobile app development in different ways. As this continued, users started branching out to those new environments. This created a problem for businesses as they now had to target multiple areas in order to reach their potential customers. However, a viable solution in the form of cross-platform app development came into the picture to save the day! It allowed developers to write codes which would work across various environments. With time, many such solutions came to be. Here, the need to understand the differences between different cross-platform app development platforms arises because one could work better than the rest for a particular business which assumably has its own requirements that need to be satisfied. In this blog, we will compare four prominent solutions, namely - React Native, Ionic, Xamarin, and NativeScript, to understand the advantages and disadvantages of each platform. 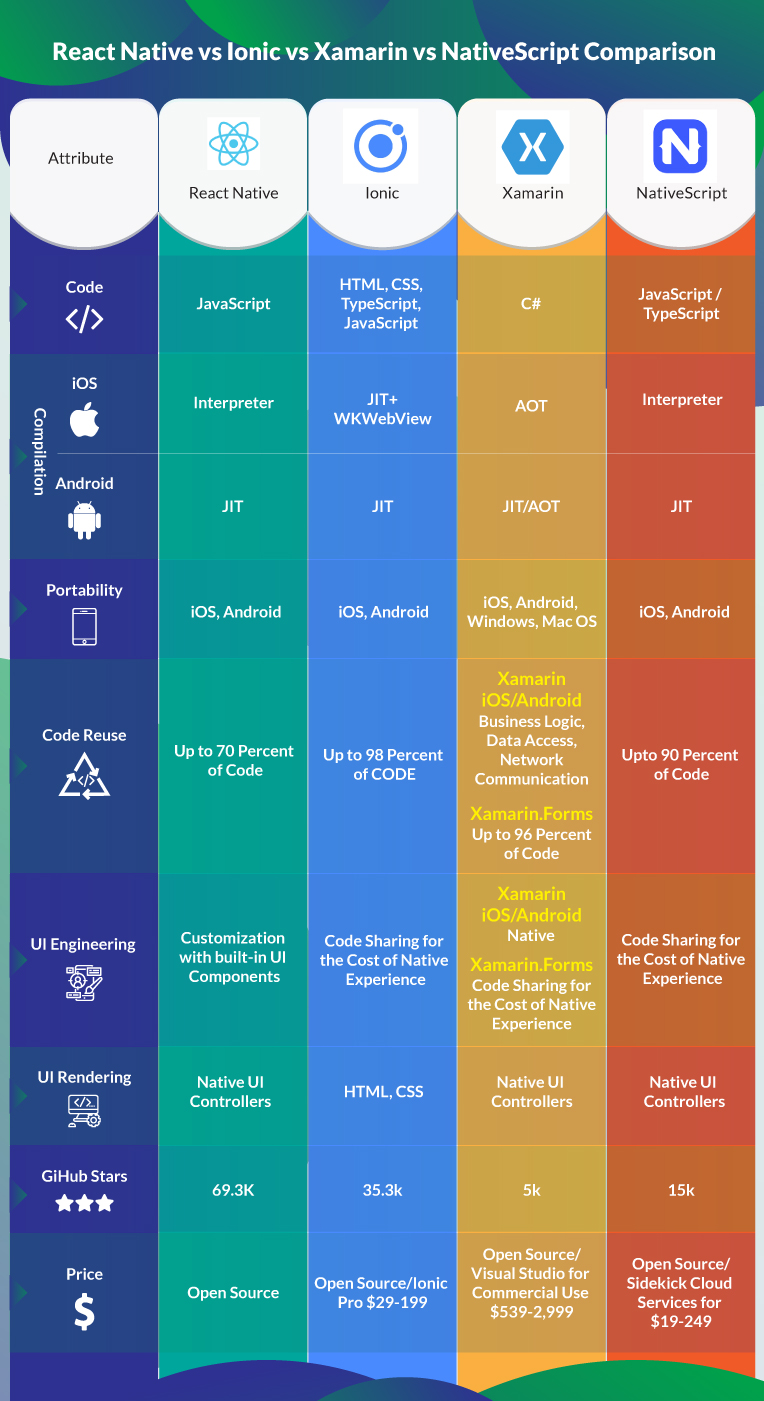 Here is the comparison of the 4 prominent cross-platform app development solutions based on the language stack used and performance.

JavaScript is one of the most powerful and dynamic programming languages. Employing it, React Native enables itself with a brilliant environment for developers to code and develop quality cross-platform mobile apps. According to a recent Stack Overflow survey, about 70% of the developers use JavaScript to make apps. This indicates that you will easily find professionals who are adept at React Native. Another important aspect of this platform is that it couples the benefits of React.JS, which is a web framework that is supported by Facebook.

Written in Sass, the ionic core was originally based on AngularJS. This platform’s framework is enabled by various languages like HTML5, CSS, and JavaScript. Developers make use it to build applications that are wrapped by Cordova wrapper, which allows them to access native platform controllers. Additionally, a superset of JS - TypeScript, is used to improve the quality of the code. However, it is optional and mobile apps can still be written in simple JS.

Quite similar to Ionic, this platform enables developers to write codes with JS along with its superset TypeScript. The UI is made with XML and CSS. However, it does not get into Cordova wrapping. Instead, it leverages the runtime with native API access. Angular and Vue.JS programmers can integrate their frameworks with NativeScript to convert existing web apps to mobile apps. Of course, tweaking the UI and adjusting the app to suit mobile interaction will be required.

It employs web technologies to render the applications. So, this platform does not perform as good as React Native or Xamarin in terms of speed. It attempts to recreate the native behavior instead of using native components. However, the testing process is fast as it can be tested on any browser.

Xamarin.Android and Xamarin.iOS are more native-like because they are primarily focused on sharing business login. They’re able to take advantage of native UI controls.

Xamarin.Forms, on the other hand, is more focused on code sharing along with less-platform specific behavior. 96% of the source code is reusable and this tends to reduce the performance in several operations.

Similar to React Native, it offers similar performance results as the native apps because of its direct connection with native APIs. While React Native requires the bridge APIs to be built, NativeScript injects Android and iOS APIs directly into JS VMs, which provides access to native APIs without having to write bridges.

These are two critical aspects which one has to analyze before choosing a suitable cross-platform. Along with these, other aspects like graphic user interface and pricing may also influence the choice. In order to reach larger pools of audiences, cross-platform app development services as a great solution by allowing developers to design and build functionality across multiple environments by writing the codes only once. This offers a great opportunity for businesses as they can now employ such a solution to target their customers across different areas!

Looking to hire React Native App Developers in New York? Get in touch with Openwave! Our experts deliver exceptionally when it comes to Cross-platform Mobile App Development! Sign up with us today and get started by availing from our solutions and services!