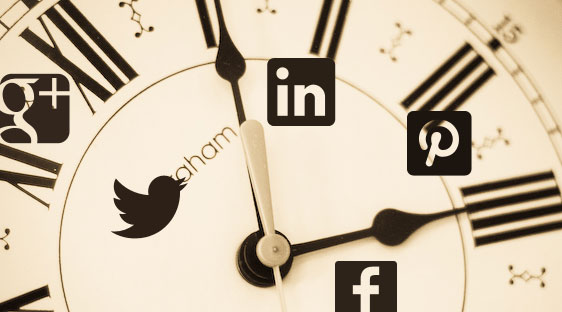 In today’s world, it is not just important to post the right content but also when to post it. Especially on social media sites like Twitter and Facebook, this plays a huge role in determining how much traction your post or tweet gets. This is because visitors and followers prefer using social media sites during specific hours which means of you start your post during these hours, you will not only witness an increase in shares, but also an increase in traffic.

The best days to post in Facebook are Thursdays and Fridays. Studies show that 86% of the posts are published during the workweek with engagement peaking on Thursday and Friday. Further, the engagement rates fall 3.5% below average for posts published Monday through Wednesday. In correlation, the happiness index on Facebook spikes by 10% on Friday. As you will already be aware, the less people are at work, the more they are on Facebook! The optimal time to post is early afternoon with 1pm currently seeing the most number of shares and 3pm with the most number of clicks. Further, with most people checking into Facebook with their mobiles these days, it has been found that 80% of the mobile users check their phones early morning. So the best times to post on weekdays is 6-8 am.

On twitter, Weekdays have been found to provide more engagement than weekends. This could be because businesses work during the weekdays while consumers explore brands during weekends. Engagements and CTRs are highest on weekdays and Wednesdays. So, the best days to tweet are from Monday to Friday during the week. Regarding the best time to post, 5pm sees the highest number of re-tweets, with 12 pm and 6 pm seeing the highest CTR. This could be due to lunch breaks and people looking for something to keep them occupied on the commute home after work. Twitter sees the most traffic 9 am -3 pm Monday through Thursday. But tweeting when there’s high traffic may mean more competition. So, choose wisely.

According to Linkedin, Weekdays during Business Hours are the best time to post. Also, Linkedin is most often used right before and right after working hours with Tuesday and Thursday seeing the maximum amount of social media traffic from business people. It has also been found that posts during work hours receive less traffic. So the worst time would be Monday and Friday for US based time zones with the best times to post being 7-8 am and 5-6 pm.